Six to be inducted into Nebraska-Kearney Athletic Hall of Fame 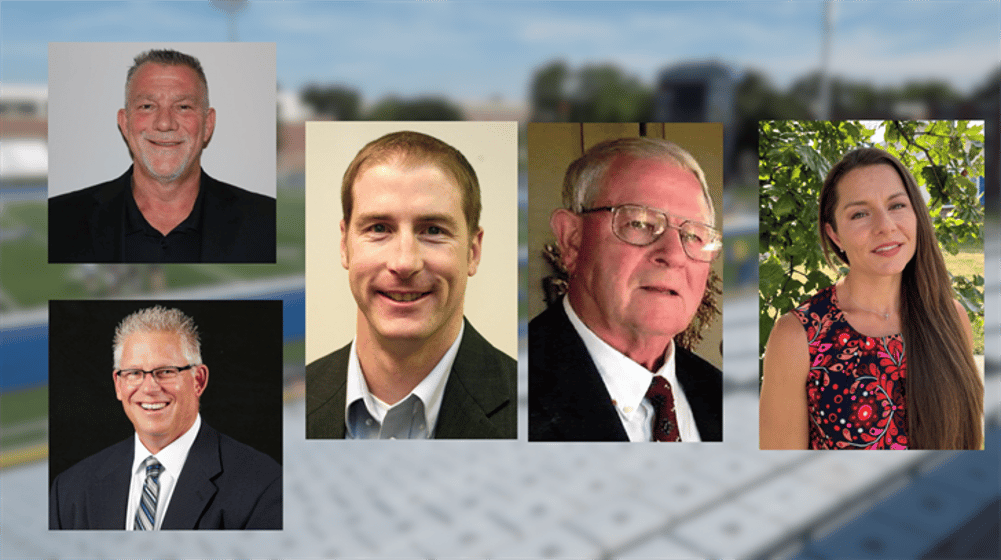 KEARNEY, Neb. - Five former student-athletes and a former head coach will be inducted into the Nebraska-Kearney Athletic Hall of Fame during ceremonies on Homecoming weekend this Oct. 28-29.

The Athletic Hall of Fame Banquet begins at 5:30 p.m. on Friday, Oct. 28, in the Ponderosa Room of the Nebraskan Student Union. A dinner follows at 6:15 p.m. with the induction ceremony afterwards. Tickets are $35 per person and $15 for youths 12 & under ($40 price for adults and $15 for youths begins on Monday, Oct. 17). Reservations can be made on the UNK Alumni Association website. Please purchase by Friday, Oct. 20.  ?

On Saturday, Oct. 29, the class will be recognized at half time of the football game vs. Northwest Missouri State. That contest kicks off at 2 p.m.

Backes was a standout on the Kearney State track and field and football teams. A four-year letterwinner in both sports, he twice led the Lopers in rushing while being the second-best receiver at the same time. On the track, Backes was an All-American in the 400-hurdles.

The Columbus native helped football win three straight Nebraska College Conference (NCC) titles and was part of the 1963 squad that made the NAIA Playoffs and was ranked in the top five nationally. During that era, the playoff field consisted of just four teams with KSC making its' inaugural appearance in 1963. Also a starting punt and kick returner, Backes still ranks fourth in school history in yards per carry (6.5) and is tied for eight in career rushing touchdowns (22). For his efforts, he was a one-time All-District and two-time All-Conference selection.

In the spring of 1963, he earned All-American honors in the 400-hurdles at the NAIA Championships in Sioux Falls. Backes finished fifth (54.70) with the speedster a key member of relay teams that helped the Lopers dominate the NCC Championships on an annual basis.

Backes is retired and lives in Columbus with his wife, Ginny. He previously was the activity director at Southeast Community College in Milford.

One of four Loper women track and field athletes to earn five or more Division II All-American honors in a career, the Central City native also was a two-time Rocky Mountain Athletic Conference (RMAC) Champion. Graham was part of UNK squads that finished runner up at the RMAC indoor and outdoor championships several times and won the 2003 outdoor title.

Graham lives in Central City with her husband, Zeb, and their five daughters; Bailey, Ellie, Skylar, Tatum and Quinn. She is an assistant volleyball coach at Central City High School, is a Gallup-certified Strengths Coach and is the owner of You Are Worth It. The Boutique opened its physical store in March 2022. ?

Jura is one of 11 All-Americans in Nebraska-Kearney men's basketball history, earning accolades as both a senior and junior. The Columbus southpaw is one of three Lopers to be a two-time All-American.

The forward had career averages of 17.7 points and 8.8 rebounds per game while shooting 57 percent from the field. Jura played on teams that won 98 games, reached the NCAA Tournament four times and won the 2006 Rocky Mountain Athletic Conference (RMAC) Tournament. The 2004 Lopers advanced to the "Sweet 16", the third UNK squad to do so.

He lives in Axtell with his wife, Michelle, and their children Eva, Jude and Eli. He is an agent and shareholder in GTA Insurance Group.

?Stonacek is one of the top defensive linemen in school history, being one of only eight Lopers at the position to earn first or second-team NAIA All-American honors. The Pierce native also was a two-time All-District 11 and two-time All-Central States Intercollegiate Conference (CSIC) selection.

The three-year letterwinner and five-year team member was part of Loper squads that won 25 games and two CSIC titles. The 1984 unit was outright champions, the sixth and final CSIC crown for the Lopers. Stonacek played on defensive units that had a scoring average below 19.0 each season and held opponents to under 300 yards per game. Between 1982-85, KSC held nearly a third of its opponents under 10 points.

After college, Stonacek spent time with the NFL's St. Louis Cardinals. He currently is a Senior Oncology Account Manager at Seagen Genetics. He lives in Lincoln with his wife, Shari, and they have seven children; Justin, Joslin, Jasmin, Jaidin, Jedmin, Jaclin and Joycin.

(Walston) Hatt is one of the most decorated Aqualopers in school-history. The Kansan left with school-records (six and 11 dives) on both the 1 and 3-meter boards and is one of only three swimmers or divers to earn Division II All-American status.

Battling injuries throughout her career and learning to dive off the 3-meter board once she got to UNK, Hatt was an NCAA Championships qualifier on both boards between 2000-02. She missed the 2001 national meet due to injury but came back to earn All-American status at 3-meters in 2002. At the NCAA Championships, she and her fellow divers first had to go through an elimination round before a finals round later in the meet.

Hatt currently lives in Lincoln where she is the Director of Pilates, Genesis Health Clubs. She and her husband, Ryan, have two children in David and Devri.

Morris served as head football coach between 2000-14 after being an assistant for 13 seasons. The Tampa native was part of the transition from Kearney State to UNK the NAIA to NCAA Division II, independent status to the Rocky Mountain Athletic Conference (RMAC) and the RMAC to the MIAA.

A 2022 Nebraska Football Hall of Fame inductee, Morris lives in Kearney with his wife, Darla. He recently retired from Nutrien Ag Solutions.