Huskers Fall in Marathon at Minnesota, 3-2 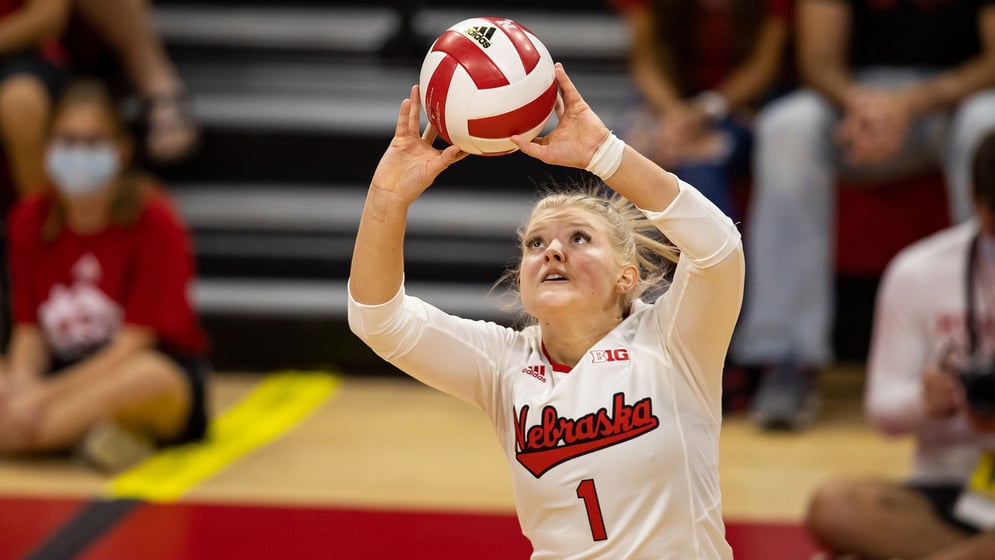 Nicklin Hames had her sixth straight double-double Saturday at Minnesota.

Nicklin Hames is now tied for Nebraska's rally-scoring era career assists record and shares second on the Huskers' all-time list, having matched former Husker and current volunteer assistant coach Kelly Hunter (4,125 assists from 2013-17). Hames capped the evening with a season-best 53 assists, a career-high-tying 23 digs, three blocks, two kills and two aces en route to her 14th double-double of the season and her sixth in a row.

For the first time this season, five Huskers had double-figure kill performances on the night. Madi Kubik tallied her fourth double-double of the season on a team-leading 15 kills with 14 digs, three blocks and an ace to pace NU.

Kayla Caffey posted 11 kills with a career-high nine blocks to lead all players at the net.

Lexi Rodriguez totaled a season-high 27 digs to pace NU alongside five assists. Kenzie Knuckles and Keonilei Akana added 10 more digs each, and Knuckles chipped in two aces. Nebraska finished with a season-high 94 digs as a team.

Set 1
NU led 5-2 out of the gate, but the two teams battled to six ties up to 13-13 -- the last on a Krause kill. The Huskers twice pulled within one, but a 7-1 Gopher run eventually got it to set point at 24-17. They fought back with four straight points on a Batenhorst kill, two UM attack errors and a Hames ace, prompting a Gopher timeout at 24-21. A UM ball handling error stretched the run to 5-0 and cut the differential to two, but the Gophers closed it out on the next point with a block to take the opening set 25-22.


Set 2
Minnesota and Nebraska traded runs to start the second set, with the Gophers going up 3-0 before the Huskers tied it on a Caffey/Krause block, a Kubik kill and a Knuckles ace. The run extended to 7-0 as Caffey teamed up with Krause and Kubik for two more stops, followed by an ace and a kill by Knuckles for a 7-3 lead and a Gopher timeout.

Another short run from UM at 3-0 was stopped when Caffey hammered a kill, but the Gophers used an additional three-point spurt to regain the lead at 10-9. The Huskers drew the set even again at 10-10 on a Stivrins kill and 11-11 on a Hames/Stivrins block, but a 5-1 run put the Gophers ahead 16-13 before NU called for a break.

The Huskers still trailed but hung tough. UM hit set point on a Wenaas kill, and NU went to work from there, holding off seven set points to completion. A 4-0 run pulled things even at 24-all, and a Krause shot pushed it to 25-25. The Huskers finally the lead at 28-27 on a Krause kill and a Gopher attack error, but Samedy knotted it a final time. Stivrins added a kill, and she and Knuckles blocked Samedy to cap the marathon set, 30-28. The block was the first of Knuckles' career, and a raucous celebration sent the Huskers to the locker room with the match tied 1-1.

Set 3
Neither team could gain more than a two-point foothold until Minnesota went up 11-8 at the Huskers' first timeout. The Gophers built to their largest lead at 21-13 before NU took another timeout.

A Samedy kill pushed UM to set point at 24-18, and the Huskers appeared primed for another late surge. Kubik issued back-to-back kills followed by a Gopher attack error, trimming it to 24-21 for a UM timeout.  But Wenaas came out of the break with a kill, closing the set at 25-21.

Set 4
The Huskers found themselves down 14-11 in set four, but Hames rattled off kill and an ace before a UM attacking error evened it at 14-14. Caffey then terminated and had consecutive blocks with Krause and Kubik for a 17-15 Husker advantage.

The set stalled four more times before NU built a 23-21 lead on the back of three straight kills from Hames, Sun and Stivrins. The teams traded point from there, with a Sun kill bringing it to set point at 24-22. A Caffey kill -- her 10th of the night -- sealed it for NU at 25-23 and sent the match to five. The Huskers outscored UM 5-2 to close the set.

Set 5
The Huskers had six kills on their first seven swings but committed three early service errors in the decisive fifth set, which stood at 8-7 Minnesota by the media timeout. The Gophers surged out of a 9-9 tie with a 6-0 run to claim the set, 15-9.

Noting Tonight's Match
-Tonight was Nebraska's sixth match of the year with at least 10 blocks as a team.
-The Huskers' 94 digs as a team were their highest total since 104 vs. Penn State on Nov. 2, 2018.
-Madi Kubik has led the Huskers in kills in 12 straight matches.
-The contest was Nebraska's longest match of the season, lasting three hours and two minutes.

Up Next
Nebraska continues its road stretch on Thursday, Nov. 4 at Illinois. First serve is set for 8 p.m. at Huff Hall in Champaign, Ill., and the match will be televised on BTN and streamed via its digital extension on the FOX Sports app. John Baylor and Lauren Cook West will have the radio call on Huskers Radio Network.